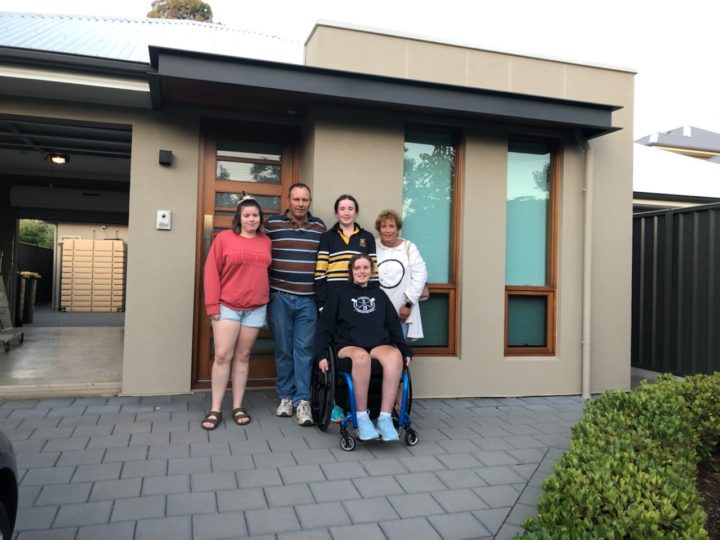 Stuart and Julie Gunn are a farming family that live approximately 650km west of Adelaide on the Western Eyre peninsula, 20kms from Port Kenny. Stuart is the fourth generation to the farm on the home property and over the last twenty years they have expanded their farming enterprise adding another three farms to their operation.

Their farming operation Primary focuses on Cereal cropping (wheat and barley) but also small acreage of legumes are grown. They run a 1500 head self-replacing Merino flock.

Stuart and Julie have three daughters one at University in Adelaide and two attending Boarding school in Adelaide.

On December 16th 2018 their family’s life changed dramatically. Katelin their middle daughter who had only been home on the farm for 36 hours from school had a car accident on the property.

This left Katelin with life threating injuries and 6 months in hospital, the result was Katelin became a paraplegic.

Stuart and Julie quickly recognised that they were going to have to make some major changes. The first was that Julie was to move to Adelaide full time and that a house was going to be needed.

After exploring home loans and business loans with existing lender themselves they were either unsuccessful in obtaining a home loan or the conditions were unacceptable to them.

This is when Stuart and Julie contacted AAA Group. Ashley Evans and his team after a number of phone calls and emails had gathered enough information and made an initial assessment of them to say that they believed they could find a lender to provide a home loan. They consulted with our Accountants, Bank Manager and Bank Regional Manager discussing various options and keeping all stakeholders updated throughout the process.

Ashley and his team worked amazing hard over a number of months, keeping Stuart and Julie in formed and telling them what information was required. Nothing was to much trouble as they worked through the lender’s requirements in a quick and professional way.

The outcome was that on 8th of November 2019 Stuart and Julie were able to purchase a house in Adelaide for themselves and their daughters to live.

While Katelin still faces many challenges to her life and ongoing rehabilitation, it is thanks to Ashley and the team at AAA Group that she has a place to live.

Read More
Interested in becoming a member? Join Us